A group of over 300 Belmont students and alumni is calling for the removal of three members of Belmont’s Board of Trustees with ties to CoreCivic.

“We’re not taking no for an answer,” said Alexis Smith, one of the founders of the group Be Better Belmont.

Based in Nashville, CoreCivic is a private prison corporation serving as “the nation’s largest owner of partnership correctional, detention and residential reentry facilities,” according to its website.

Be Better Belmont demands for the removal of board member Damon Hininger, the current CEO of CoreCivic. Previous calls for his removal came in 2018 from students concerned about CoreCivic connections to immigration detention centers.

But now, students and alumni also call for the removal of John Ferguson, a previous chairman of the corporation, and Andrea Overby, whose husband sits on the Board of Directors at CoreCivic.

Director of Public Affairs Amanda Gilchrest says activist groups have been misinformed about the work of CoreCivic. She commented on behalf of Hininger and the company.

“Unfortunately, much of the information about our company being shared by activists is wrong and politically motivated, resulting in some people reaching misguided conclusions about what we do and how and why we do it. The fact is we play a small but meaningful role in helping the government solve problems in ways it could not do alone.”

But the for-profit prison company does not adhere to the Christian principles Belmont should uphold, said sophomore and Be Better Belmont founding member Anika Heywood.

“The things that CoreCivic stands for don’t align with what Belmont says it stands for. Having this relationship is a conflict of interest,” said Heywood.

“How are we defining God’s love? Is it only God’s love toward white people? Contributing to a company like CoreCivic is basically saying that,” said Smith.

Be Better Belmont cited CoreCivic’s treatment of prisoners and lobbying efforts as grievances in a widely shared graphic denouncing the company.

The student activist group is concerned about a number of lawsuits filed against CoreCivic from 1998 to 2010. Over 1,000 lawsuits have been filed against the company during this period, ranging from civil rights infringement to medical care, according to Prison Legal News.

“The allegations made in lawsuits are not confirmed as fact until a jury or court renders a verdict. Therefore, making sweeping generalizations about our company based on numbers of lawsuits with no context is misleading and portrays CoreCivic in a false light,” said Gilchrest.

Be Better Belmont also claims CoreCivic led a task force pushing bills such as truth-sentencing. They say these bills play a role in systemic racism and disproportionately imprison Black people.

CoreCivic considers any accusations of lobbying to be defamatory, Gilchrest said.

“Under long standing policy, CoreCivic does not lobby on any policies, regulations or legislation that impact the basis for or duration of an individual’s incarceration or detention. CoreCivic ended its non-voting membership in ALEC in 2010. We were a non-voting member of the organization, only involved to monitor policy. No one from our company was ever designated as a task force chair or in any leadership capacity,” said Gilchrest.

Smith first learned Belmont’s ties to CoreCivic after the death of George Floyd and the rise of the Black Lives Matter Movement, long after her graduation date in 2017.

“I’m really mad at myself that I am just another white person who it took this long to realize that this was going on,” said Smith.

Smith decided to form a group of activists devoted to changing the university’s stance, she said. She reached out to Heywood to help her form a task force to address CoreCivic connections at Belmont.

As a Black student at Belmont, Heywood joined Be Better Belmont because she wants to see more action than talk from the administration in response to racism, she said.

She was dissatisfied with Belmont’s response to recent police brutality murders, saying it was too unspecific.

“It felt like a blanket statement and felt like we weren’t truly supported. Thinking back to CoreCivic, it is just more and more things that make people feel that the campus doesn’t truly support them and wants to use them as a token,” said Heywood.

They launched the Be Better Belmont facebook page on June 3. Since then, its petition on Change.org has garnered more than 2,ooo signatures in support of its cause.

The university issued a statement in defense of the individuals on its Board of Trustees.

“Belmont has an outstanding Board of Trustees who volunteer their time, their expertise and their financial resources to support students in a variety of ways from scholarships to faculty endowments to building outstanding facilities. This Board comprises women and men who are all accomplished professionals, committed Christians and people of high character.”

The university also stated it does not hold an official stance on private versus state-run prisons.

CoreCivic’s own personal commitment to education is why it donated to Belmont, Gilchrest said.

“While CoreCivic has no formal relationship with Belmont University, some of our leaders have been proud to volunteer their personal time in support of the school, and our company has been proud to provide financial support for scholarships in the past. This is in keeping with our longstanding commitment to education. Hundreds of educators work in our facilities every day to help those in our care prepare for success after prison, and we’ve made several significant commitments to reentry programming – unmatched in the public or private sector – with education being a key component,” said Gilchrest.

Since 2008, CoreCivic has donated 16 gifts, averaging about $11,200 per year, to support various student and faculty activities. Belmont’s annual revenue budget last year was approximately $300 million, according to Belmont’s Office of Communications.

For alumni like Robert Gay, a 2011 commercial music graduate, this financial support from CoreCivic means he will not be donating to Belmont until things change.

“I have been proud to be a Bruin, but at this time, I am not because of what I have discovered the university represents based on its associations with CoreCivic,” said Gay. “I want to be proud of my university again.”

Gay has had three private conversations with Fisher regarding Belmont’s associations with CoreCivic. While he appreciated the audience with Fisher, there was no promise of change from Fisher, he said.

Going forward, Be Better Belmont plans to continue to advocate for a complete break of all ties to CoreCivic, for the university to speak more transparently of its associations and for structural and policy change within the university.

“We’re not going to be a campus that displays ‘Bridges to Belmont’ as a campaign while also taking lives from that same community by accepting money from CoreCivic. You can’t have both anymore,” Smith said.

“We’re proud of our diverse workforce and our efforts to fight recidivism and change the lives of those in our care. We know there’s much more to be done, and we’re committed to being impactful in the fight for equality and the peaceful existence of every American regardless of the color of their skin.”

The members of Be Better Belmont do not believe the prison industry has any place among educational institutions. Especially, Christian ones like Belmont, said Gay.

“Putting people behind bars for profit does not stand in solidarity with lives at all,” said Gay.

“No education is worth the price of putting human beings in cages. There has to be an alternative.”

This article written by Kendall Crawford. 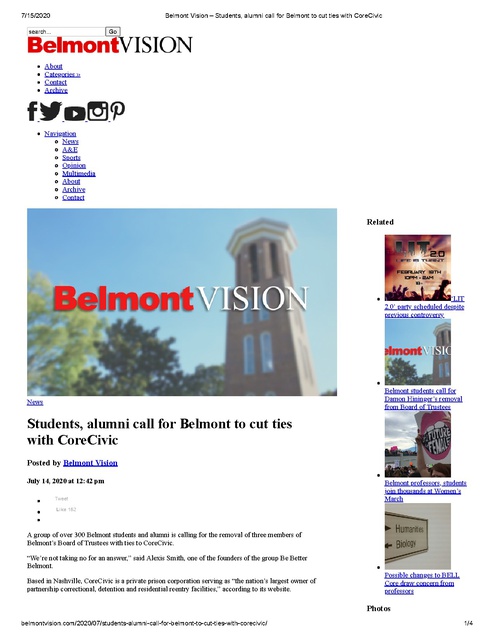