PLN Mentioned in Article about COVID-19 in Prison

Prisons and jails across the country are failing to adequately protect prisoners and staff from the pandemic.

From the beginning of March, when the Covid-19 virus was spreading rapidly through the country, through late May, along with many others who volunteer at San Quentin State Prison in Marin County, California I had been worrying about a possible outbreak there. Infectious diseases can spread very quickly in prisons and jails, given that these facilities house large numbers of people who are confined indoors most of the time and given social distancing is an impossibility.

In March, just before the prison went on lockdown because of the pandemic, I spoke to one of our facilitators, a prisoner, who expressed concern not about “if” the virus would reach the prison, but “when”.

“One of you [staff, volunteers, officers] will bring it in,” he told me.

Since the lockdown, my organization, Green Life, which runs an environmental education program at the prison, has joined with many social justice organizations in calls for early release or commutation of sentences of the elderly, medically vulnerable, and those nearing eligibility for parole.

Meanwhile, I was relieved to be hearing that due to many precautions taken early on in the crisis, the men’s prison was not experiencing a mass outbreak as was the case in many prisons across the country.

But in early June, much to our alarm, we heard about a transfer of untested prisoners from a men’s prison in Chino, which was experiencing the largest outbreak of Covid-19 among inmates. From there, the news got worse. San Quentin reported 15 positive cases on June 3. In two weeks, that number tripled, and as of Saturday, June 27, the facility was reporting more than 600 cases, though, thankfully, no deaths have been reported so far.

The coronavirus started spreading rapidly through the prison last week, activists with Oakland’s Ella Baker Center for Human Rights said during their virtual press conference, Tuesday, June 16. They said the infection most likely stems from a May 30 transfer of 121 inmates from the Chino prison, California Institution for Men, which has seen 16 coronavirus-related deaths. Prior to the transfer, San Quentin had zero confirmed cases. They said that, since then at least four of the men transferred from Chino have tested positive for the virus.

It appears that officials did segregate the men transferred from Chino from the rest of the prison population, but it’s likely that prison staff might have served as a conduit for the spread.

The unhealthy conditions at prisons are well documented. In June 2016, Prison Legal News published an article making the connection between pollution and prisons:

“[C]orrectional institutions have many environmental matters to consider in order to protect the health of the inmates, employees, and the community where the prison is located,” the article states. “Some prisons resemble small towns or cities with their attendant industries, population and infrastructure. Supporting these populations, including their buildings and grounds, requires heating and cooling, wastewater treatment, hazardous waste and trash disposal, asbestos management, drinking water supply, pesticide use, vehicle maintenance and power production, to name a few potential environmental hazards. And the inmate training programs offered at most institutions also have their own unique environmental challenges ... the US Environmental Protection Agency has been inspecting correctional facilities to see how they are faring. From the inspections, it is clear many prisons have room for improvement.”

That same year a special investigation by Earth Island Journal and Truthout revealed that “mass incarceration in the US impacts the health of prisoners, prison-adjacent communities, and local ecosystems from coast to coast.”

The oldest prison in California, San Quentin is certainly one of those facilities that faces “unique environmental challenges,” the most pressing of them being overcrowding. The prison currently has 3,507 prisoners, 425 more than it’s official capacity of 3,082.

Here are excerpts from a June 6 report Juan Haines, a Green Life facilitator and a journalist, sent to Solitary Watch, watchdog group that investigates, documents, and disseminates information on the widespread use of solitary confinement in US prisons and jails.

“Anthony Torres, 27, says at breakfast and dinner, prisoners sit four at a table, which ‘really defeats the purpose of social distancing.’ Torres continues, the dayroom is sectioned off with signs and red X’s made of tape. The cots are too close to practice social distancing. Prisoners will get a rules violation for not wearing a mask in the dayroom; however, as for correctional officers (COs), ‘The COs sit at a desk, 6 to 7 people crammed together with no mask.’…

There are additional reports from those with contacts inside the prison, affirming that correctional officers are in rotation throughout the prison, not taking safety precautions, and are likely the ones spreading the virus to the otherwise isolated sections of the prison.

There are also reports that many of the men have been trying to hide any illness they might have for fear of being put “in the hole” (solitary confinement), because it is the only place aside from the hospital that works as a quarantine.

The sad fact is this same story is being repeated in prisons across the country. According to a report by The Prison Policy Initiative and the American Civil Liberties Union released last Thursday, most prisons and jails across the country are failing to adequately protect prisoners and staff during this ongoing pandemic.

“Despite all of the information, voices calling for action, and the obvious need, state responses ranged from disorganized or ineffective, at best, to callously nonexistent at worst,” the report said.

“As of June 22, 2020, over 570 incarcerated people and over 50 correctional staff have died and most of the largest coronavirus outbreaks are in correctional facilities,” it noted. “This failure to act continues to put everyone’s health and life at risk — not only incarcerated people and facility staff, but the general public as well. It has never been clearer that mass incarceration is a public health issue.”

Perhaps due to the growing concern, mobilization of activists, and public outcry, the California Department of Corrections and Rehabilitation (CDCR) has halted a transfer of men from San Quentin to North Kern State Prison scheduled for this week. According to an official update from CDCR. additional testing of the individuals scheduled for transfer revealed two positive cases. “Testing for staff at San Quentin has also been completed,” the update said. “We understand and share the concern of Covid-19 cases in the state’s prisons, and are implementing multiple strategies to control the spread of the virus.”

Despite this assurance, activists fear that more “secret” transfers will happen especially in rural areas where there is not as much scrutiny from the public.

As the crisis continues to grow, and more people who are incarcerated at San Quentin and other prisons get sick from Covid-19, the inevitability of fatalities is bringing their families and community outside of prisons to the brink of hopelessness and despair.

How can you help? Use this link to send an email to state leaders demanding immediate action.

You can also find updates and calls to action on Restore Justice and Ella Baker Center’s social media platforms. 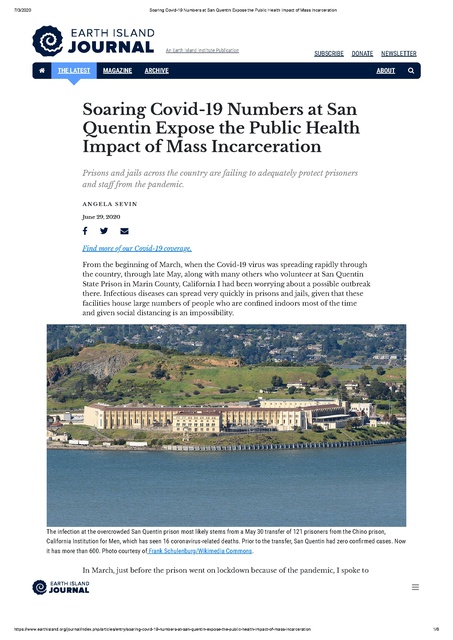