Walmart Inc. is reviewing its policy on working with suppliers that use prison labor as civil unrest over systemic racism roils the U.S. and activists target companies that benefit from the practice.

“As permitted by law, a small number of our U.S. suppliers use voluntary labor as part of prison rehabilitation programs,” Walmart said in an emailed statement provided by spokesperson Tricia Moriarty. The company’s policies “strictly prohibit involuntary prison labor” and workers that are employed by Walmart suppliers are paid “prevailing wages,” the retailer said.

The review is part of the firm’s racial equity initiatives announced this month as protests broke out worldwide following the killing of George Floyd by a Minneapolis police officer. Bentonville, Arkansas-based Walmart said on June 10 that it would stop keeping “multicultural” hair care and beauty products in locked cases.

Chief Executive Officer Doug McMillon also pledged to make changes to give the company’s 340,000 Black workers in the U.S. more opportunities. A $100 million pledge to address systemic racism by Walmart and the founding Walton family is the second-largest corporate commitment to date.

While the U.S. makes up close to 5% of the global population, it has almost 25% of the world’s prisoners, with about 2.3 million inmates, according to the American Civil Liberties Union. Black men are disproportionately more likely to go to prison than White men.

Prison labor is legal in the U.S., but it’s used mostly for the public sector. Only about 6,000 prisoners work for private industry, according to Paul Wright, editor of Prison Legal News and director of the Human Rights Defense Center.

To contact the reporter on this story:
Sophie Alexander in San Francisco at salexander82@bloomberg.net

To contact the editors responsible for this story:
Pierre Paulden at ppaulden@bloomberg.net 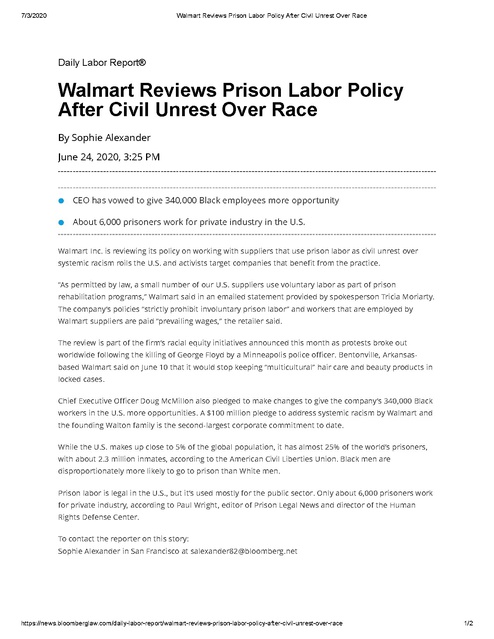