SEATTLE – Yesterday, the non-profit organization Human Rights Defense Center (HRDC) secured a major victory in the fight against prison profiteers with a new opinion issued by Judge Ronald M. Gould in the Ninth Circuit Court of Appeals. This opinion affirms that the company Numi “has changed the simple government function of returning confiscated money to a released inmate into a venture in which the released inmate’s money can be eroded or lost by the charge of profit-oriented fees.” HRDC will use this favorable opinion to continue the fight against companies that impose excessive and unfair fees on prisoners.

HRDC, whose mission is to protect the human and civil rights of prisoners, originally filed suit in the District Court for the District of Oregon in 2015 on behalf of plaintiff Danica Brown. Ms. Brown had been arrested in Portland, Oregon in 2014 after exercising her First Amendment rights in a public protest following a Missouri grand jury’s decision not to indict Darren Wilson for the police-shooting death of Michael Brown. Ms. Brown was arrested and transported to the Multnomah County Jail, where $30.97 in cash was confiscated. Her charges were dropped and the confiscated money was returned, but in the form of a Numi debit card. Ms. Brown was not given a choice for how her money was returned. The debit card, one of thousands issued each year by the company Numi and its partner Central National Bank and Trust Company, included charges such as a $5.95 service fee that was taken five days after release. Because of the fees included on this non-optional card, Ms. Brown eventually lost 22% of the card’s original value.

In July 2015, HRDC and Ms. Brown filed a complaint against Numi and Central National Bank and Trust Company on behalf of a proposed class of formerly incarcerated people who had received debit cards from the Defendants. Four claims were alleged in this complaint: (1) a violation of the Electronic Fund Transfer Act, which prohibits the issuance of unsolicited debit cards absent certain requirements; (2) a violation of the Oregon Unfair Trade Practices Act; (3) conversion under Oregon state law; and (4) unjust enrichment under Oregon state law. After a second amended complaint was filed and the district court denied Defendants’ motion to dismiss, the case moved to discovery. At this point Defendants filed a motion for summary judgment, which was granted by the trial court, which dismissed the case on the grounds that release cards were the functional equivalent of cash.

HRDC, in conjunction with Public Justice, filed an appeal in the Ninth Circuit in 2018 to challenge the district court’s ruling. After consideration, Judge Ronald M. Gould issued an opinion on March 16, 2020 reversing the dismissal and allowing the case to proceed. As Judge Gould wrote in the opinion, “There is at least one crucial difference between the release card and cash: the ticking clock.” In that framing, the Court affirmed that Numi should not “be able without restriction to provide cards to released inmates who have not asked for them and who are likely to end up with less money than was taken from them.”

“We are pleased with the court’s ruling that recognizes that prisoners and arrestees are not profit centers for banks and their government collaborators to use as their personal ATM,” said HRDC executive director Paul Wright. HRDC is interested in hearing from people who have had these debit cards forced on them after being released from a prison or jail.

“With this ruling the Court recognized that corporations cannot exploit prisoners with impunity.  We look forward to holding the defendants accountable in the trial court,” added HRDC General Counsel Daniel Marshall. 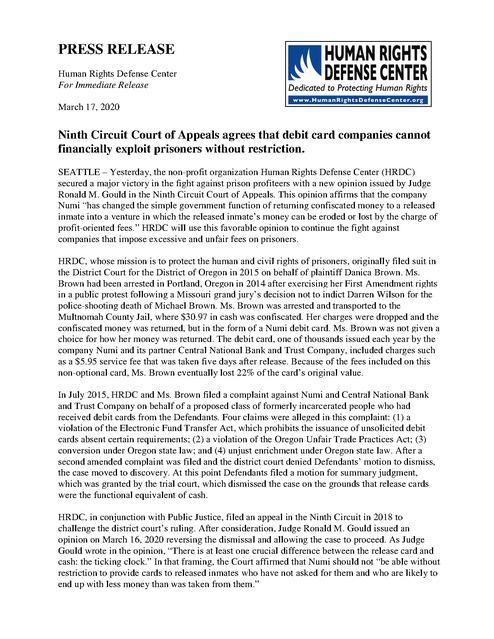