Findings published by the Human Rights Defense Center show there are about 1 million felony convictions recorded each year in the United States. Most estimates put about 4 percent of those as wrongful convictions.

Yet 2016 set a record of exonerated at 166. Since 4 percent of 1 million is 40,000 exonerations, it is apparent only a fraction of wrongful convictions are corrected. Reasons:

l Many states have laws similar to the “three strikes and you’re out” law, allowing prosecutors to seek life sentences if they can get a conviction. Idaho’s version of the law is the persistent violator statute. Many innocent people will plead guilty to a crime on the condition the prosecutor will drop the enhancement.

l Police perjury also accounts for a large portion of wrongful convictions. Police agencies purge misconduct records at an alarming rate. The officer who squeezed the life out of George Floyd had more than 70 misconducts on his record.

l The problem is no accountability. Judges allow these acts of misconduct in the courts. The buck should stop at the judge who allows all these misconducts.

l Another important factor not mentioned is ineffective assistance of counsel. In mine and in most cases, the court-appointed attorney has no inclination to help his client. The client is nothing more than a paycheck. This is even worse than misconduct.

Is this the best plan?

... The Nez Perce County leadership has an interesting process for building a new courthouse. I recently took an extensive tour of the courthouse. Something really needs to be done. Every one should go look for himself.

While I understand a group of county officials have reviewed this issue and have a possible plan in place, I believe the plan could use some public input. What’s more interesting is how the project would be financed.

Do you recall the county sued the Lewiston Urban Renewal Agency to close the district because its project is completed? The county wanted to get its money back. Approximately $200,000 combined of our money was spent suing ourselves.

At least $600,000 per year had been going to pay for the jail. That money is now being considered as part of an annual payment for a new courthouse.

I will not say this is a bad idea but I wonder why the same logic applied to the URA case wouldn’t apply to the jail.

Why not give the money back to taxpayers, then provide options to pay for a new courthouse?

Now the county leadership is pressuring the city to spend millions of dollars on a new police station so the county can have space for a new courthouse. Can there be another way?

How about we get our city and county leaders to work together on a comprehensive plan that works for us all?

We the people need to wake up to the reality of a possible Joe Biden presidency. The facts are he’s moved far left and is adopting the Marxist philosophy.

This means private property will be no more.

Black Lives Matter is a lie.

It’s a terrorist organization now worth $500 million with most going to the Democratic National Committee through ActBlue.

He’d be a puppet for the squad that would dictate his every move. If he gets elected, you better build a fallout shelter. 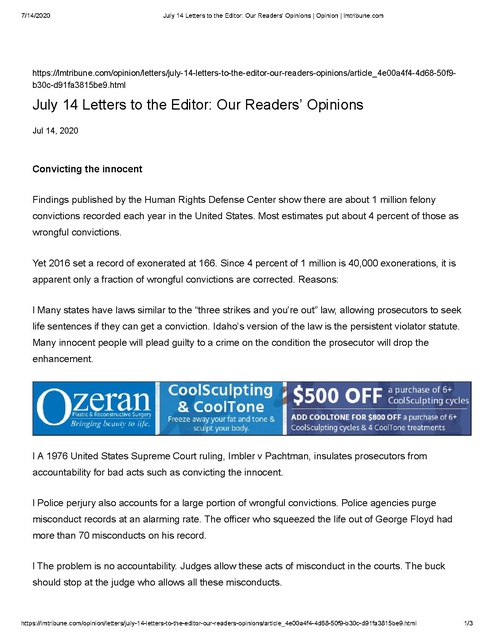