Nashville, TN – On Friday, the Securities and Exchange Commission (SEC) upheld objections filed by the nation’s two largest for-profit prison companies – CoreCivic, formerly known as Corrections Corporation of America (NYSE: CXW), and The GEO Group (NYSE: GEO) – that challenged shareholder resolutions to prohibit the firms from housing children or parents who have been separated during immigration proceedings.

Both CoreCivic and GEO Group operate detention centers under contracts with Immigration and Customs Enforcement (ICE), part of the U.S. Department of Homeland Security. While the companies denied that they house any children separated from their parents (though they do house parents separated from their children), the resolutions noted the firms “may change that policy in the future or may enter into future contracts” to house separated children.

The resolutions would have required the companies to adopt a policy of not housing separated immigrant detainee parents or children by December 31, 2019, and to modify or cancel any contracts in conflict with that policy when it went into effect.

According to news reports, immigrant families are still being separated at the U.S.-Mexico border and the Trump administration is “actively considering” plans to renew separation efforts.

Both companies filed objections to the resolutions and sought a “no action” ruling from the SEC to exclude them from a shareholder vote. Among other arguments, they said the resolutions should be excluded because they related to the firms’ “ordinary business operations.”

The resolutions were introduced by Alex Friedmann, associate director of the non-profit Human Rights Defense Center and a former prisoner who served time at a CoreCivic-operated prison in the 1990s, who owns a small amount of stock in both companies as an activist shareholder.

“CoreCivic and GEO both claimed they had no intention of housing children who have been separated from their parents due to U.S. immigration policy, but they both took action to ensure these resolutions would not proceed to a shareholder vote,” Friedmann stated. “Their actions speak louder than their words; they have clearly indicated that should they house separated children in their detention facilities in the future, that would simply be part of their ‘ordinary business operations.’ But it is certainly not ‘ordinary’ for the affected families.”

In upholding the companies’ objections to the resolutions, the SEC wrote: “Specifically, the Proposal[s] would dictate the terms of services to be provided by the Company and specify the manner in which the Company shall implement certain aspects of the policy requested by the Proposal.”

The supporting statements for the resolutions noted that CoreCivic and GEO have controversial histories with respect to housing immigrant detainees, including incidents in which employees sexually abused female detainees, protests and hunger strikes at the companies’ immigration detention centers, deaths in custody and federal lawsuits against both firms for using immigrant detainees to perform work for wages as low as $1.00 per day.

“If CoreCivic executives don’t believe they should profit from families being separated, then they should have no objection to this resolution and should let it go before shareholders for a vote,” Friedmann said when the resolutions were filed in December 2018. “While CoreCivic claims it doesn’t set immigration policy, it does have the ability to set its own policies and to decline to use its facilities to hold children or parents who have been separated by order of government officials.”

The Human Rights Defense Center ran a GoFundMe campaign to cover the cost of contacting shareholders about the resolutions if they made it through the SEC’s review process.

For additional information about this issue, please click here.

The Human Rights Defense Center, founded in 1990 and based in Lake Worth, Florida, is a non-profit organization dedicated to protecting human rights in U.S. detention facilities. In addition to advocating on behalf prisoners and publishing books and magazines concerning the criminal justice system, HRDC engages in state and federal court litigation on prisoner rights issues, including wrongful death, public records, class actions and Section 1983 civil rights cases. 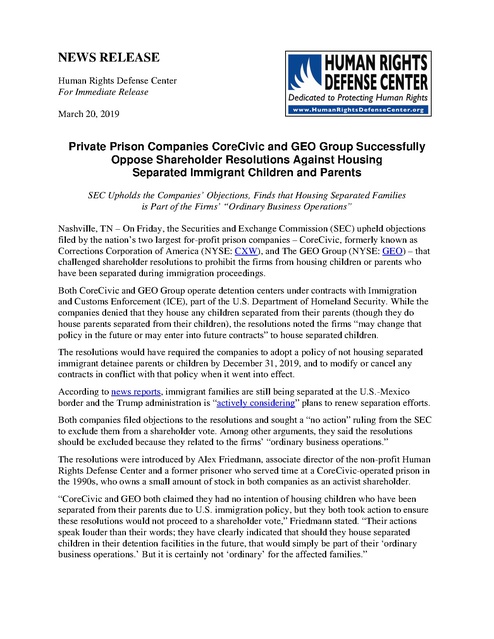