Company claims resolution would infringe on its “ordinary business operations”

Nashville, TN – Last month, a shareholder resolution was filed with CoreCivic, the nation’s largest for-profit prison company, formerly known as Corrections Corporation of America (NYSE: CXW), that would prohibit the firm from housing immigrant detainee children or parents who have been separated from each other by government officials.

CoreCivic operates a number of immigration detention centers under contract with Immigration and Customs Enforcement (ICE), part of the U.S. Department of Homeland Security. While the company has denied that it houses children separated from their parents, the resolution noted it “may change that policy in the future or may enter into future contracts to house separated immigrant children and/or parents.”

According to news reports, immigrant families are still being separated at the U.S.-Mexico border and the Trump administration is “actively considering” plans to renew separation efforts.

In a January 4 letter submitted to the Securities and Exchange Commission (SEC), CoreCivic objected to the resolution and sought a “no action” ruling to exclude it from a shareholder vote.

In its letter, CoreCivic argues the resolution should be excluded because it “involves matters relating to the company’s ordinary business operations,” adding, “a company’s decision to offer a particular service to its clients and the manner in which the company provides said services are the exact type of fundamental, day-to-day operational decision meant to be covered by the ordinary business operations exception.”

CoreCivic also complains that the resolution did not define the terms “immigrant” or “separated” in the phrase “immigrant detainee children ... who have been separated from their parent or parents,” stating the resolution was therefore “inherently vague” and “there is no way for the Company or the stockholders voting on the Proposal to determine what actions or measures the Proposal requires.”

The resolution was introduced by Alex Friedmann, associate director of the non-profit Human Rights Defense Center and a former prisoner who served time in one of the company’s prisons in the 1990s, who owns a small amount of CoreCivic stock as an activist shareholder.

“If CoreCivic has no intention of housing children or parents who have been separated due to U.S. immigration policy, then it would have no reason to oppose this shareholder resolution,” Friedmann stated. “By doing so, they have clearly indicated that they in fact intend to house immigrant children and parents who have been separated – for profit, of course, which is their business model. That is apparently part of their ‘ordinary business operations.’”

“If CoreCivic executives don’t believe they should profit from families being separated, then they should have no objection to this resolution and should let it go before shareholders for a vote,” Friedmann said when the resolution was filed in December. “While CoreCivic claims it doesn’t set immigration policy, it does have the ability to set its own policies and to decline to use its facilities to hold children or parents who have been separated by order of government officials.”

The CoreCivic shareholder resolution is posted here. The Human Rights Defense Center is currently running a GoFundMe campaign to cover the cost of contacting shareholders about the resolution if it makes it through the SEC’s review process.

Should the resolution be approved by shareholders it would require the company to adopt a policy of not housing separated immigrant detainee parents or children by December 31, 2019, and to modify or cancel any contracts which conflict with that policy when it goes into effect.

For additional information about the GoFundMe campaign, please click here.

The Human Rights Defense Center, founded in 1990 and based in Lake Worth, Florida, is a non-profit organization dedicated to protecting human rights in U.S. detention facilities. In addition to advocating on behalf prisoners and publishing books and magazines concerning the criminal justice system, HRDC engages in state and federal court litigation on prisoner rights issues, including wrongful death, public records, class actions and Section 1983 civil rights cases. 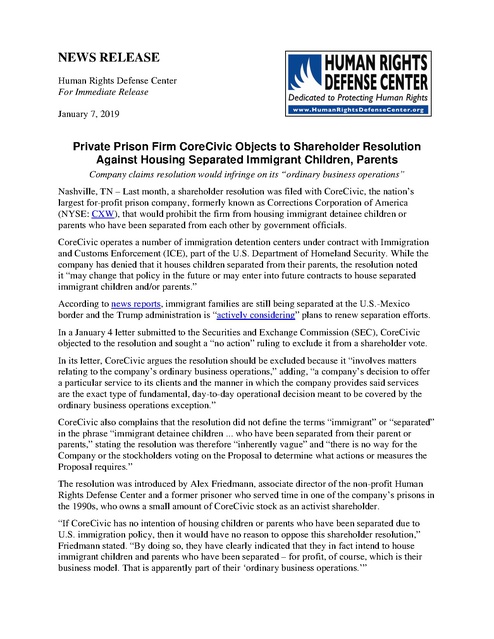