Lake Worth, FL – The Human Rights Defense Center (HRDC) has joined a friend-of-the-court brief in a lawsuit challenging the federal government’s practice of holding young, immigrant children in prison-like facilities for indefinite periods of time.

In an amicus brief submitted to the Ninth Circuit Court of Appeals on Friday, HRDC called the practice of locking up undocumented children brought across the U.S. border by family members “inherently harmful to the growth, development, and physical and mental health of children and adolescents, and ... permissible only as a last resort.”

The brief was filed in connection with Jenny Lisette Flores, et al. v. United States, a lawsuit challenging the government’s practice of locking up families that try to illegally cross the border into the United States, specifically women and children. HRDC is urging the appellate court, based in California, to rule in favor of the plaintiffs and order federal officials to immediately release undocumented children from detention centers.

According to the brief, which was joined by several other organizations, “the harms caused by detention of immigration children are not theoretical or speculative. Individual children who    are currently being detained, and who will be directly affected by this Court’s decision, have suffered actual and serious harm due to the government’s practice of indefinite, unreviewable detention of unaccompanied immigrant children.”

“There isn’t a single state in this country that doesn’t understand the harm caused by keeping young children locked up, and all of them have laws that require a child to be released as quickly as possible. The children are also being denied access to counsel which is repugnant to the constitution and the rule of law,” stated Paul Wright, executive director of the Human Rights Defense Center. “These children are being detained without any due process and without any regard for their well-being.”

The amicus brief noted that in no other context would it be plausible to suggest a government agency could lawfully detain children in prison-like conditions without attorneys for indefinite periods of time, based only on the agency’s own discretionary and unreviewable determination that the children presented a danger to themselves or others, or were flight risks, or that no less restrictive alternatives were available.

Further, the government’s position in the Flores case conflicts with decades of federal and state legislation as well as case law concerning constitutional protections, all of which recognize the critical role of procedural safeguards to protect children from arbitrary, unjust or unnecessary detention.

Currently, undocumented immigrant children and their mothers are being held in detention facilities in Texas operated by the nation’s two largest for-profit prison companies, CoreCivic (formerly known as Corrections Corporation of America) and The GEO Group. A third, smaller facility in Berks County, Pennsylvania is also used to detain immigrant families.

The Flores case, which dates back to 1985, resulted in a settlement agreement that the federal government has failed to honor, resulting in ongoing litigation and the current appeal to the Ninth Circuit. HRDC and the other organizations that joined the amicus brief are represented    by Jack Londen with the law firm of Morrison & Foerster, LLP and by Martha Matthews with Public Counsel.

The Human Rights Defense Center, founded in 1990 and based in Lake Worth, Florida, is a non-profit organization dedicated to protecting the human rights of people held in U.S. detention facilities, including the rights of children and immigrant detainees. 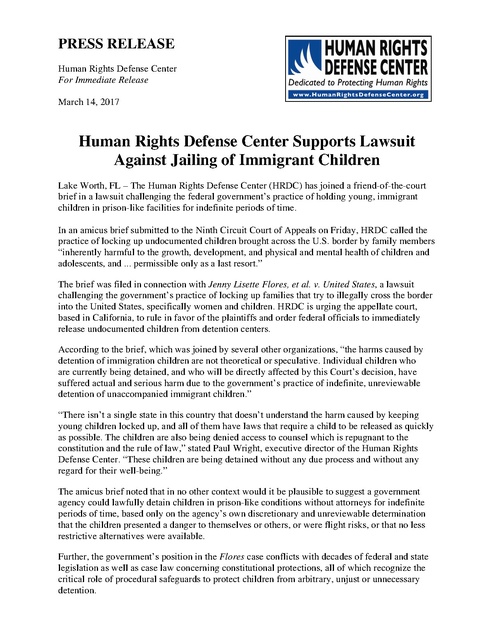