Washington, DC – On Tuesday, the Human Rights Defense Center (HRDC), a non-profit organization that has spent nearly thirty years advocating for the rights of people held in U.S. detention facilities, joined with 45 other civil rights and criminal justice groups and individuals to demand greater transparency from private prisons that contract with the federal government.

Almost one out of every five prisoners held by the federal government, and two out of every three immigrant detainees, are housed in for-profit prisons that contract with federal agencies. Unlike government-operated facilities that are required to comply with federal Freedom of Information Act (FOIA) requests, private prisons operate under a veil of secrecy.

H.R. 1980, the Private Prison Information Act, would change this. Reintroduced by U.S. Rep. Sheila Jackson Lee (D-Texas) earlier this year, the bill would require private prisons to comply with the same FOIA requirements as their government-operated counterparts.

This need for private prison transparency and public accountability is especially important in light of a report released by the U.S. Department of Justice’s Office of the Inspector General in August 2016. The report found that privately-operated facilities housing federal prisoners for the Bureau of Prisons had higher rates of contraband weapons; higher rates of prisoner-on-prisoner assaults, prisoner-on-staff assaults and uses of force; and more lockdowns.

A letter signed by HRDC and 45 other civil rights and criminal justice groups and individuals, submitted to Rep. Jackson Lee on July 11, asks, “Why should private prisons that house federal prisoners be any less accountable to the public than the Bureau of Prisons or Immigration and Customs Enforcement? We contend that because the for-profit private prison industry relies almost entirely on taxpayer support, and performs the inherently governmental function of incarceration—depriving people of their liberty—the public has a right to obtain information related to private prison operations.”

“These prisons are hired by the government, paid by the government and house federal prisoners on behalf of the government,” declared HRDC executive director Paul Wright. “But they avoid public oversight and scrutiny. If they are going to do the government’s work, it is essential they be subject to the government’s rules, including public records laws. Their records must be open to the public, especially in the wake of investigations that have repeatedly found conditions in for-profit prisons to be less safe and secure than in public facilities.”

While private prison companies routinely claim they provide safe, secure and cost effective services, they also routinely refuse to release information that would allow members of the public to determine whether those claims are accurate, the letter notes.

A copy of the joint letter is posted here. A list of the signatories is included below.

The Human Rights Defense Center, founded in 1990 and based in Lake Worth, Florida, is a non-profit organization dedicated to protecting human rights in U.S. detention facilities.HRDC publishes Prison Legal News (PLN), a monthly magazine that includes reports, reviews and analysis of court rulings and news related to prisoners’ rights and criminal justice issues. PLN has thousands of subscribers nationwide and operates a website (www.prisonlegalnews.org) that includes a comprehensive database of prison and jail-related articles, news reports, court rulings, verdicts, settlements and related documents.

Signatories to joint letter in support of H.R. 1980:

In the Public Interest

The Center for Church and Prison

The Legal Aid Society of the City of New York

The Real Cost of Prisons Project 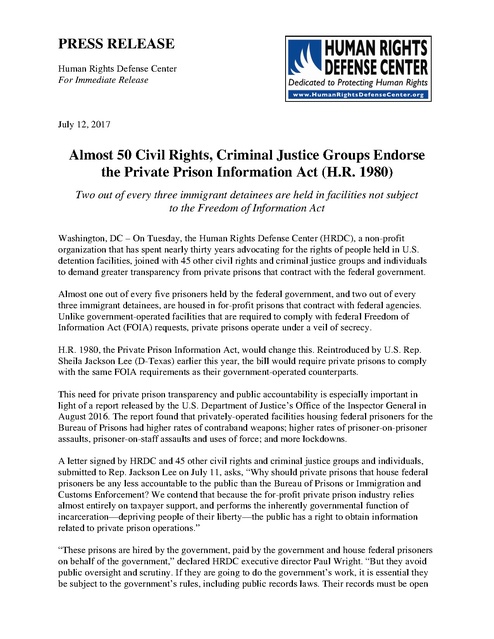