The filing of PLN’s appellate brief is the latest in a lengthy series of legal steps taken since the FDOC first began censoring PLN’s journal in 2003 due to its advertising content: PLN includes ads for companies that provide services prohibited by the FDOC, such as pen pal services and companies that purchase postage stamps. Even though such ads constitute less than 10% of PLN’s monthly journal, the FDOC has used the objectionable advertisements as a basis for unilaterally censoring PLN.

PLN filed suit, and in 2006 Florida prison officials changed their policy and informed both the district court and the Eleventh Circuit that they would no longer censor PLN based on its ads. Several years later, however, beginning in 2009, the FDOC again started to censor PLN due to its advertising content, even though nothing material had changed in the interim.

PLN again filed suit, and after a bench trial in the U.S. District Court for the Northern District of Florida, the final judgment entered in October 2015 upheld the FDOC’s censorship while also finding that prison officials had violated PLN’s due process rights by repeatedly failing to provide adequate notice of censorship decisions.

PLN appealed the district court’s ruling on its First Amendment claim while the FDOC cross-appealed the court’s judgment as to the due process violations.

On appeal, Clement noted that Florida, “alone among the fifty States, the federal Bureau of Prisons (BOP), and every county jail in the country, is violating Prison Legal News’s First Amendment rights by impounding every issue of its magazine based on the publication’s advertisements.” PLN’s journal is sent to prisons in all states and to federal facilities, including the federal supermax ADX prison in Florence, Colorado, without being censored due to its ad content. “There is simply no logical fit between the FDOC’s renewed censorial zeal and the current evidence that would justify its alone-in-the-nation censorship of a publication uniquely focused on the plights and rights of prisoners,” PLN argued in its appellate brief.

PLN is asking the Eleventh Circuit Court of Appeals to reverse the district court’s judgment as to the First Amendment censorship claim, to affirm the court’s ruling as to the due process claim and to expand the latter to ensure PLN receives individualized notice when the FDOC censors issues of its monthly publication.

The Human Rights Defense Center, founded in 1990 and based in Lake Worth, Florida, is a non-profit organization dedicated to protecting human rights in U.S. detention facilities. HRDC publishes Prison Legal News (PLN), a monthly magazine that includes reports, reviews and analysis of court rulings and news related to prisoners’ rights and criminal justice issues. PLN has thousands of subscribers nationwide and operates a website (www.prisonlegalnews.org) that includes a comprehensive database of prison and jail-related articles, news reports, court rulings, verdicts, settlements and related documents. 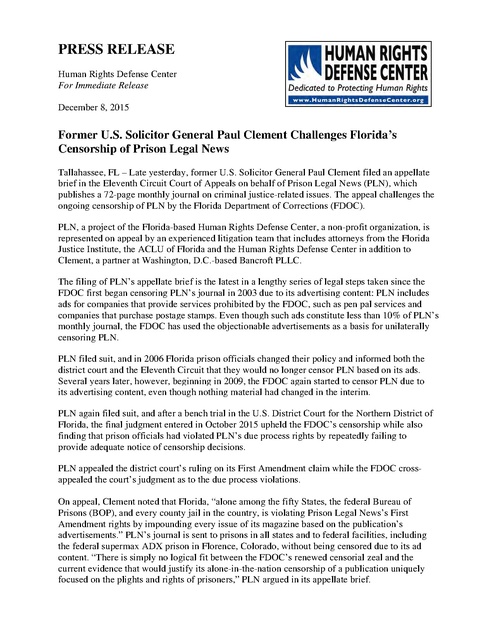