According to the complaint filed by Prison Legal News, a project of the Human Rights Defense Center (HRDC), the ADC has censored at least four issues of PLN based on articles that contain factual descriptions of sexual misconduct by prison employees: “In particular, Defendants refuse to deliver issues of PLN’s monthly publication to subscribers in ADC facilities when those issues contain articles describing sexual contact between jail or prison guards and prisoners to which the prisoners did not consent.”

The lawsuit further states that the ADC did not provide proper notice of the censorship, which would provide PLN an opportunity to appeal. Rather, PLN only learned that its publication had been censored from its subscribers incarcerated in Arizona state prisons. Specifically, the complaint claims that beginning in March 2014, the ADC refused to deliver certain issues of Prison Legal News, and the March, April, July and October 2014 issues were censored.

PLN brought this to the attention of ADC director Ryan, and although the ADC “reconsidered some of their censorship decisions” and allowed several of the rejected issues to be delivered – sometimes with redactions – not all of the Arizona prisoners who subscribe to PLN received the censored issues. According to the complaint, ADC officials have also “refused to deliver issues of publications such as Bloomberg Business, The Economist, National Geographic, and Newsweek to prisoner subscribers in ADC facilities.”

“Rape and sexual abuse by corrections employees is an unfortunate reality, which led the U.S. Department of Justice to implement standards under the Prison Rape Elimination Act,” said PLN editor Paul Wright. “Rather than censor our reporting on such incidents, including court rulings in lawsuits brought by prisoners who were sexually abused by prison employees, the ADC’s efforts would be better spent ensuring that its staff members do not rape or victimize prisoners.”

The lawsuit seeks injunctive relief, declaratory relief and damages, as well as attorney fees and costs.

The Human Rights Defense Center, founded in 1990 and based in Lake Worth, Florida, is a non-profit organization dedicated to protecting human rights in U.S. detention facilities. HRDC publishes Prison Legal News (PLN), a monthly magazine that includes reports, reviews and analysis of court rulings and news related to prisoners’ rights and criminal justice issues. PLN has thousands of subscribers nationwide and operates a website (www.prisonlegalnews.org) that includes a comprehensive database of prison and jail-related articles, news reports, court rulings, verdicts, settlements and related documents. 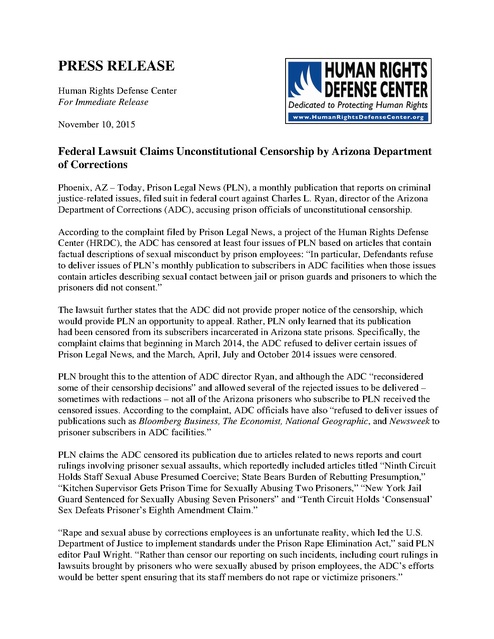